This session will showcase Sit- in # 1: Ruth Ewan: We Could Have Been Anything That We Wanted to Be and It’s Not Too Late to Change, part of a major five-chapter exhibition and event project The Ignorant Art School: Five Sit-ins towards Creative Emancipation held at the Cooper Gallery Duncan of Jordanstone College of Art and Design, University of Dundee.

Questioning what art education is and whom it serves, The Ignorant Art School brings together artists, designers, educators, activists, culture workers, students and other publics, to creatively re-imagine and co-constitute a collaborative and decolonised blueprint for a socially transformative art education that opens towards an emancipated future.

Repurposing equality as a practice rather than an ideal, The Ignorant Art School examines the histories and future possibilities of art education. Directed towards a revolutionary and creative emancipation The Ignorant Art School celebrates feminist and social activist bell hooks’ declaration of “education as the practice of freedom” by building communities of resistance and care.

Composed as five ‘Sit-ins’ The Ignorant Art School adopts the activist tactic of occupying institutional space as a critical and creative attitude and praxis to transform the Cooper Gallery into a laboratory for radical, ethical and accessible pedagogies for the many.

Rekindling the political turmoil and desires for emancipation set alight in Dundee by the French Revolution, Sit-in #1 of The Ignorant Art School by Ruth Ewan proposes ‘we could have been anything that we wanted to be and it’s not too late to change.’

Traversing multiple histories, alternative social structures and popular culture, the exhibition and online Sit-in Curriculum #1 radicalises imagination as a revolutionary act to reveal the urgent cogency of collaborative learning and transgressive reimagining as the world struggles towards a ‘new normal.’

The fulcrum underscoring Sit-in #1 are Ewan’s decimal clock and perpetual calendar installations. Inspired by these novel and disruptive modes of marking time first introduced during the French Revolution, Sit-in Curriculum #1 adopts radical forms of collaborative learning and grassroots knowledge creation. Featuring amongst others ‘An Optimism Class’, ‘A Sensuous Knowledge Class’, ‘A Play Class’, ‘A Strike Class’ and a ‘A Radical Pub Crawl’, Sit-in Curriculum #1 deploys imagination in all its rich and revolutionary power. 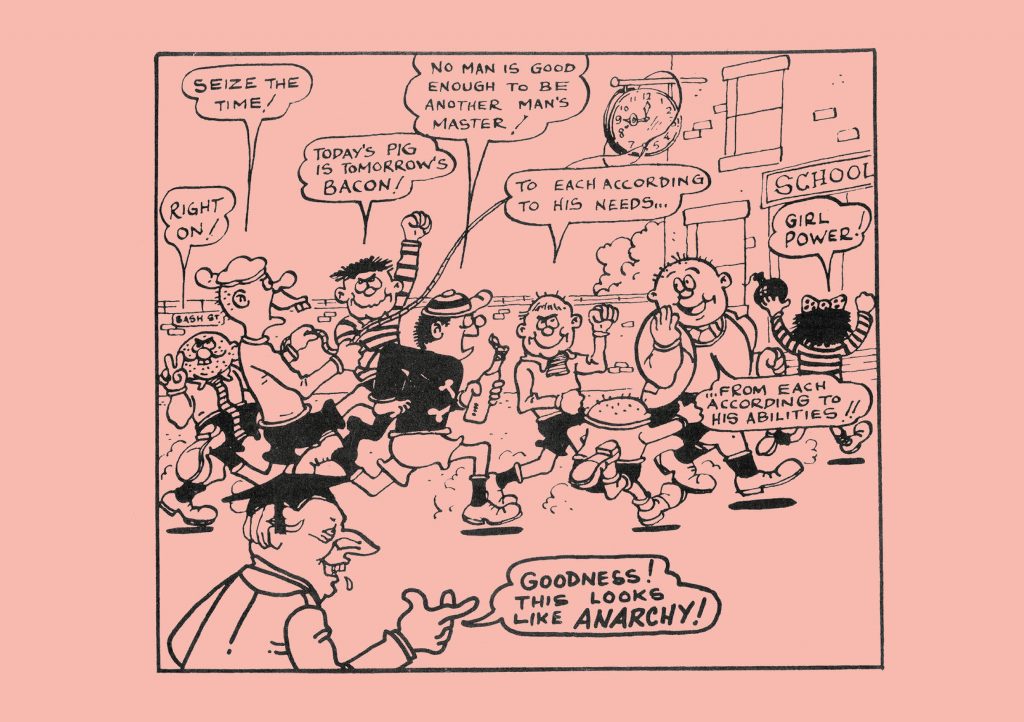 Image: from The Great Brain Robbery, 1971 by Keith Paton published by Moss Side Press Ltd. 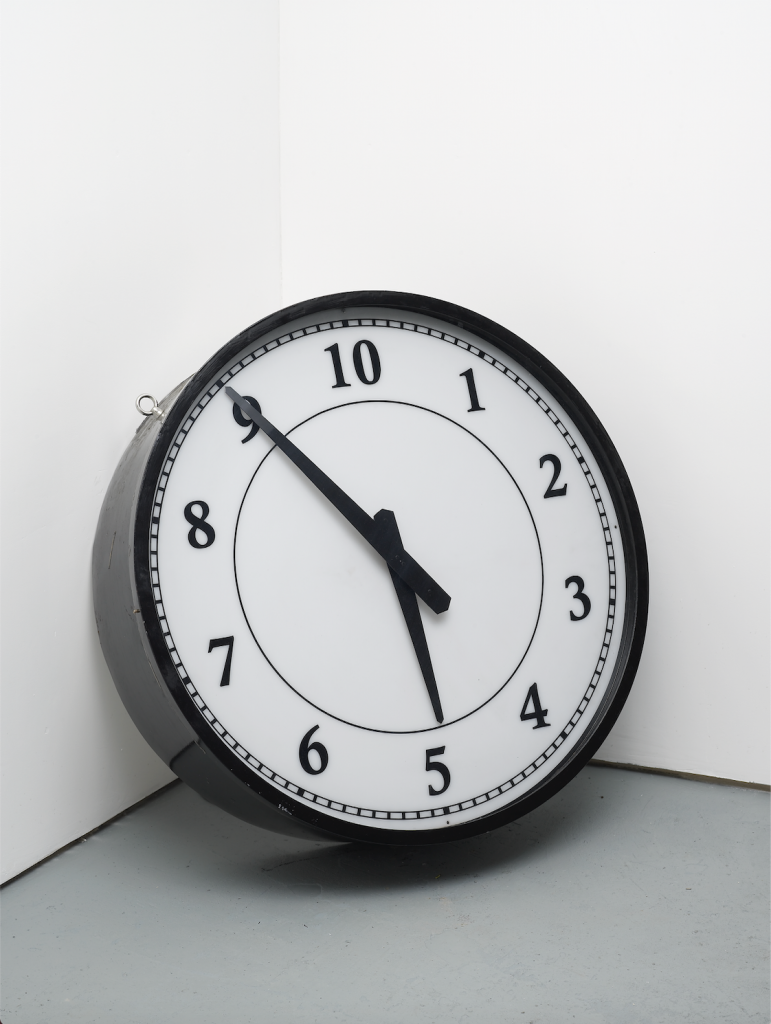 Ruth Ewan, We Could Have Been Anything That We Wanted to Be, 2011. Photo: Andy Keate 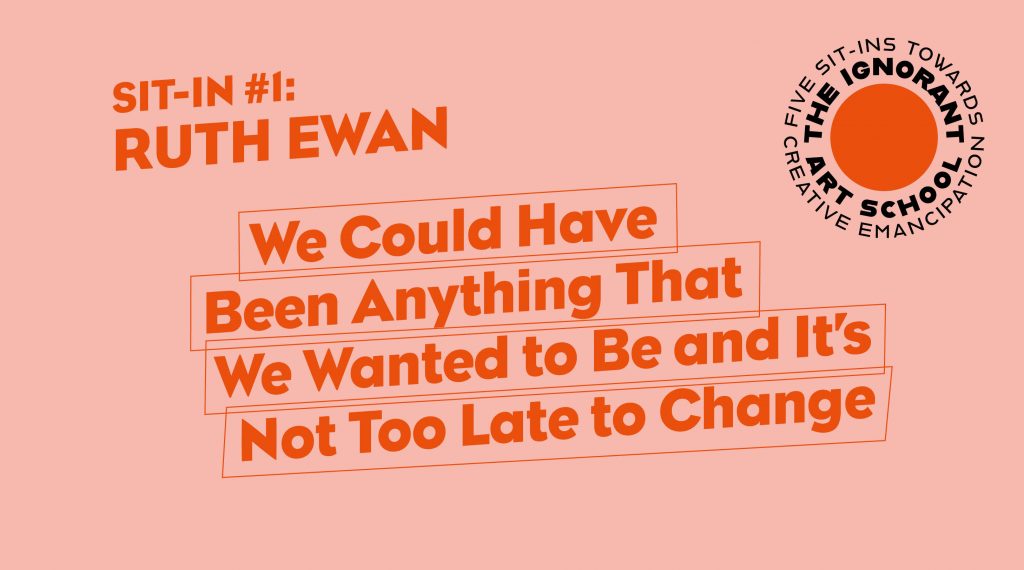 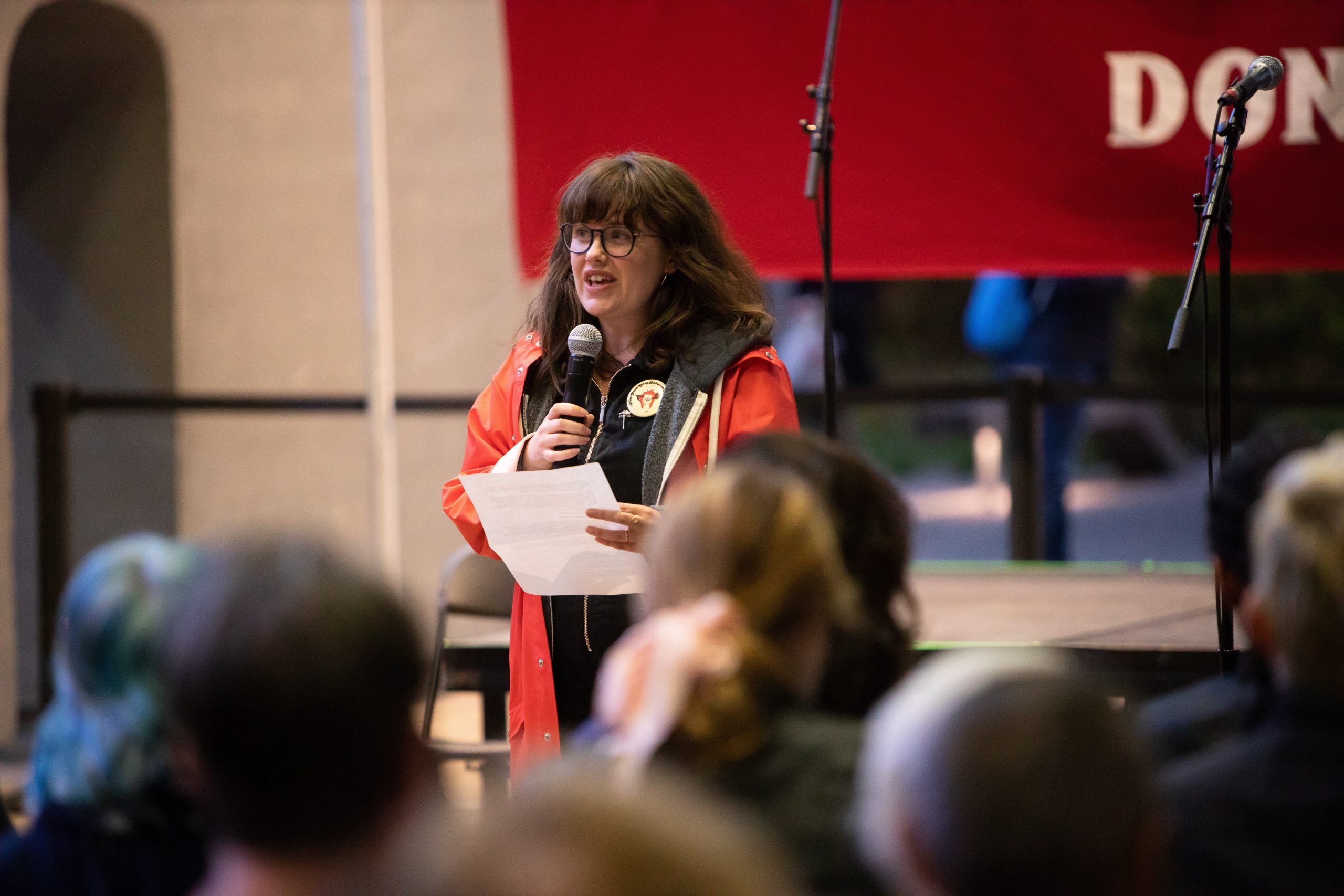 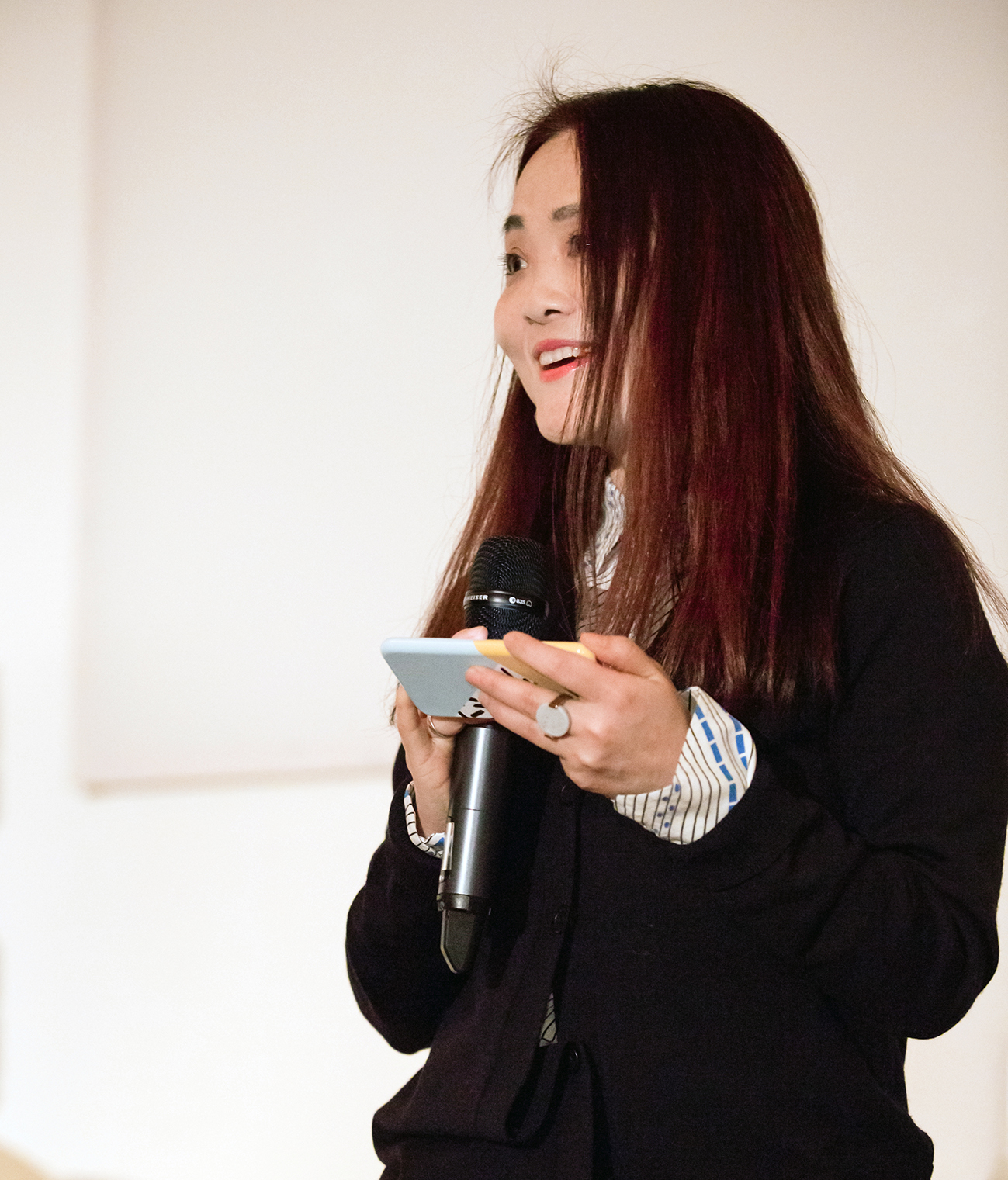 Sophia Yadong Hao is a curator, writer and editor who situates the curatorial as a mode of critical inquiry directly engaging with culture and the political as an open question. Hao is currently Principal Curator of Cooper Gallery at Duncan of Jordanstone College of Art and Design, University of Dundee. Hao has curated contemporary art exhibitions and events internationally and is the founding editor of the art journal &labels. Her publications include Of Other Spaces: Where Does Gesture Become Event? (Sternberg Press, 2019), Hubs and Fictions: On Current Art and Imported Remoteness (co-edited with Edgar Schmitz, Sternberg Press, 2016), A CUT A SCRATCH A SCORE (2015) and NOTES on a return (2010). Hao is a committee member of British Art Network Steering Committee (Tate Britain and Paul Mellon Centre), a member of Art 360 Advisory Group, and a member of Live Art Sector Review Steering Group (Arts Council England). 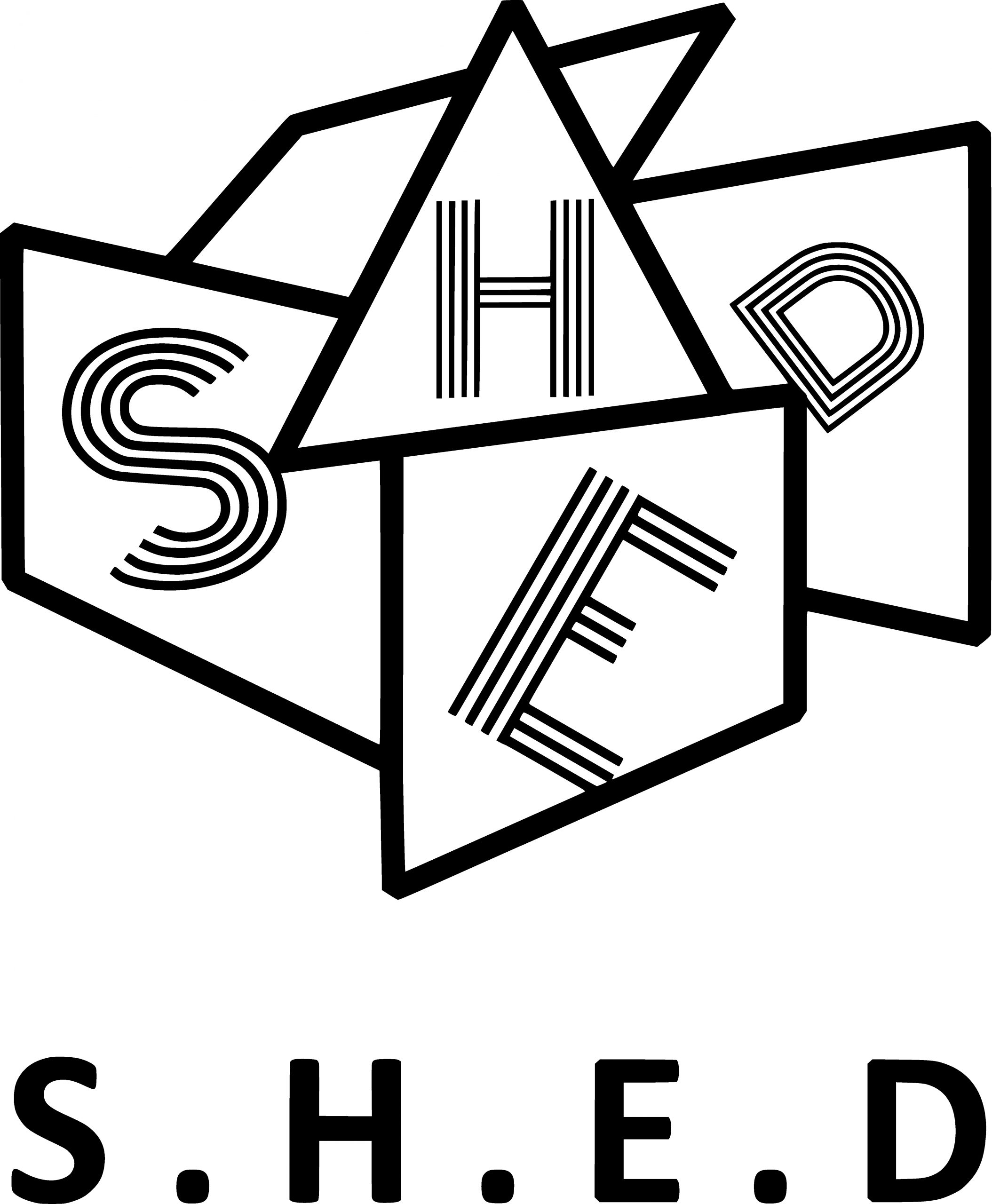 S.H.E.D – Social Higher Education Depot has taken the premise of a garden shed and created a mobile, reconfigurable space for the shedding of preconceptions about people and place. S.H.E.D has over 11 designs, that were developed with the aim of supporting co-creative practice as art-making that invites participation and explores real issues people want to discuss.

It is positioned as a curatorial, consultation, lab and public space. S.H.E.D combines design and dialogue theory. 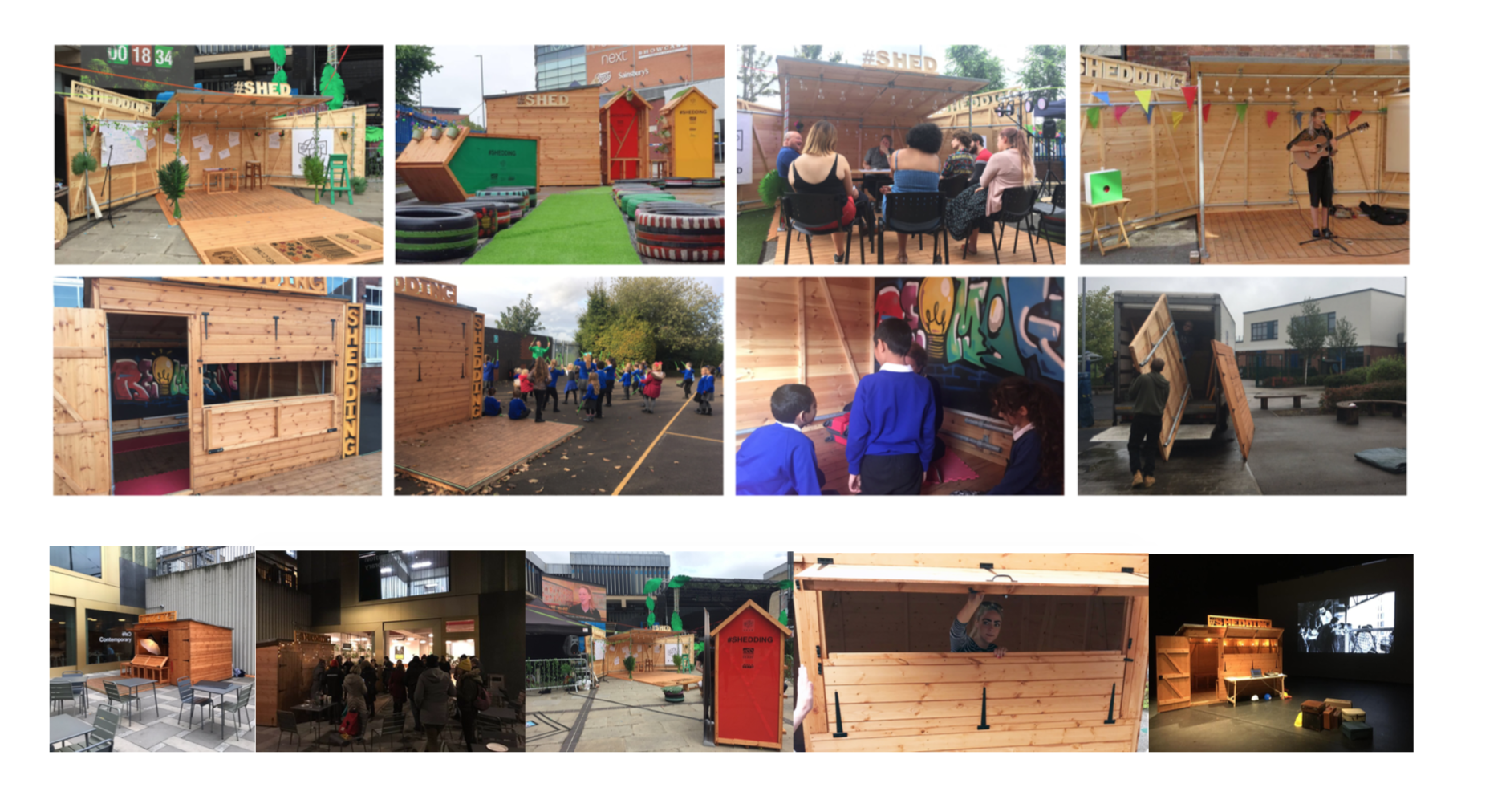